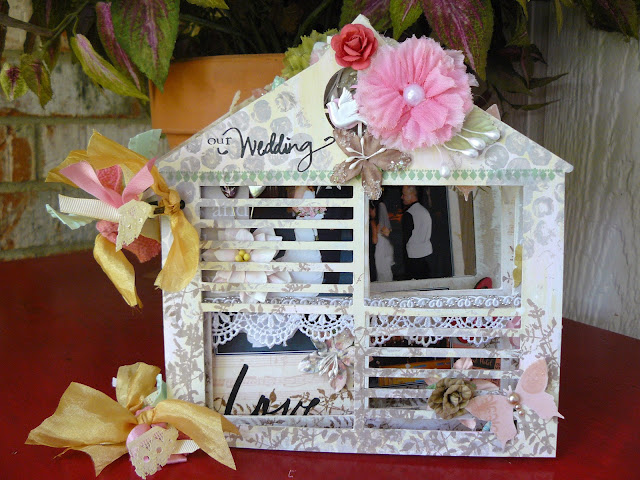 I did this mini album for the Design Team at The Crafty Scrapper.  This is my youngest son Christopher and his wife Ashley.  They got married September 25, 2010.  This little album was a challenge for each page has cutouts which makes it rather difficult to place a normal photo.  I used papers from Websters Love In.  I then inked, painted, and added lots of embellishments. 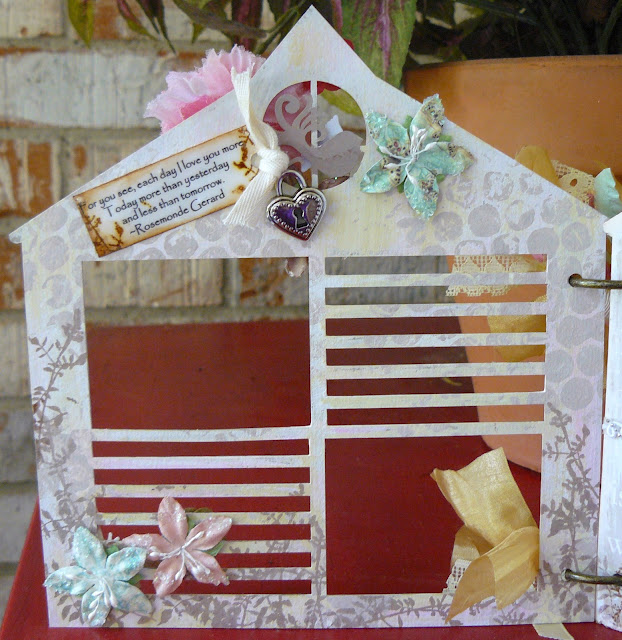 This is on the inside of the mini album.  I love this little quote by Rosemonde Gerard "For you see, each day I love you, today more than yesterday, and less than tomorrow." 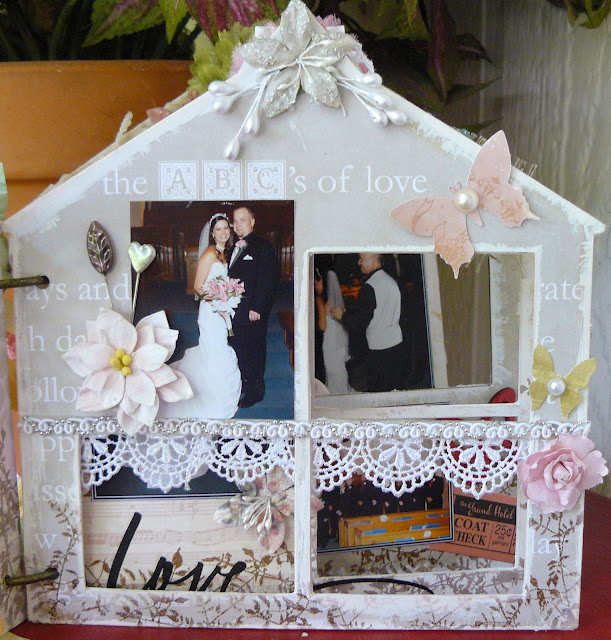 This is Ashley and Chris after they were pronounced Husband and Wife.  It was such a lovely ceremony.  This page had 3 cutouts and only had enough room for one small photo. 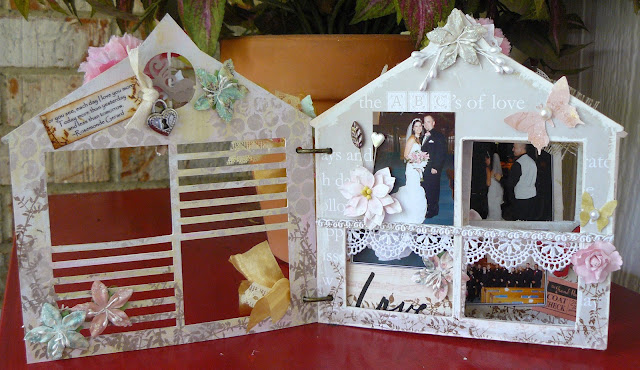 This is both pages!!! 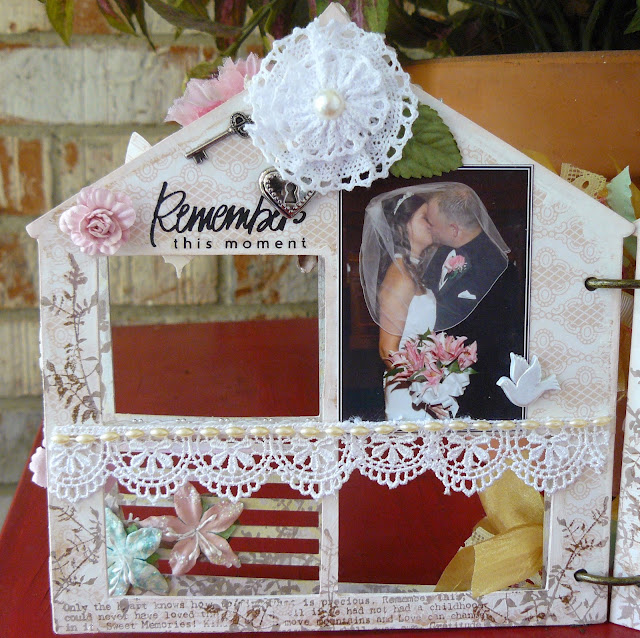 This is them sharing a kiss!  What a wonderful moment. 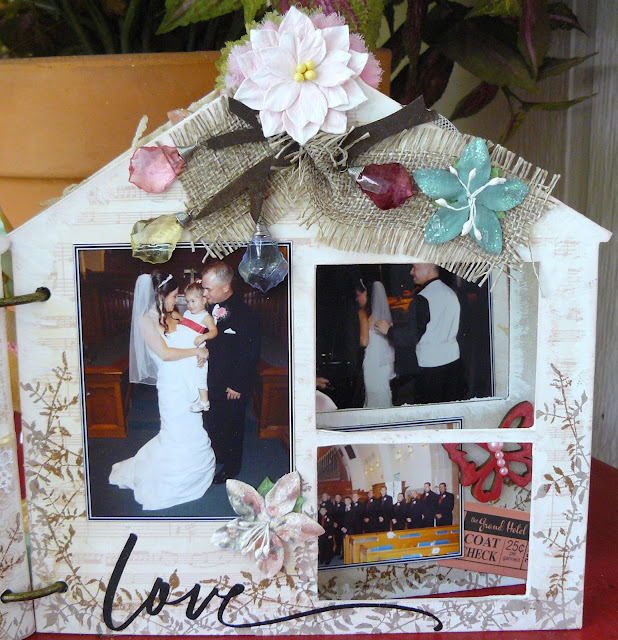 Yes, this is Ashley and Chris and there little daughter Kenzie.  Kenzie is two year old.  Yes...they were together 5 years before they got married.  They did not want to marry while she was expecting Kenzie.  They wanted her to know that they really loved each other and not because they had to get married.  They now have another child Colby.  He is 13 months old. 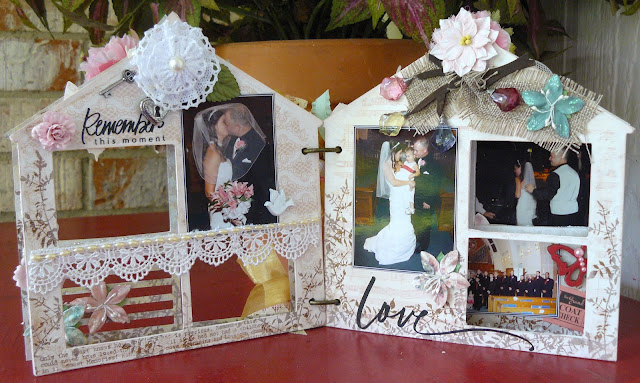 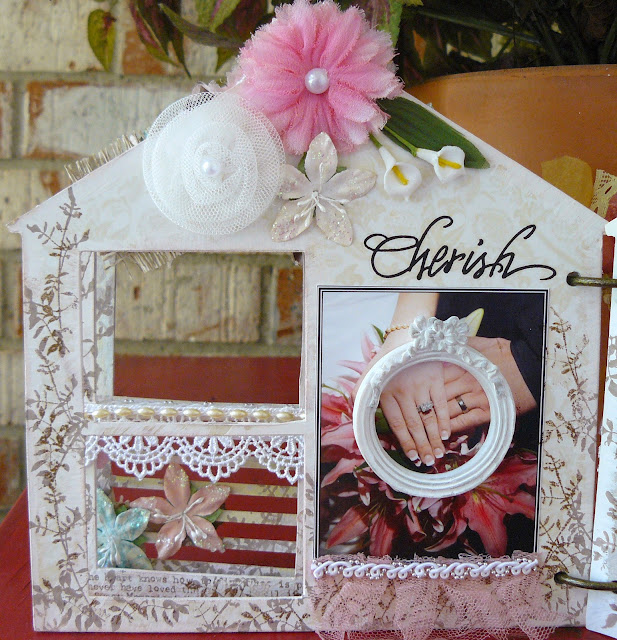 This is a photo of their wedding rings with her bouquet.  I was given this pretty frame by Melissa Francis. 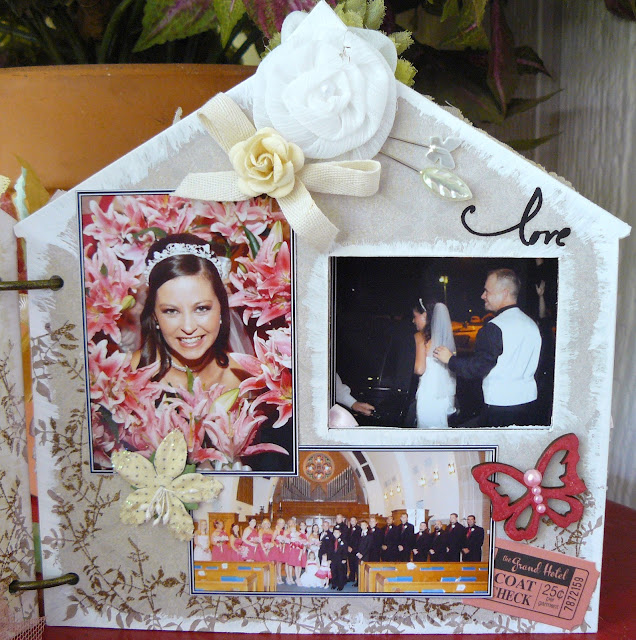 This is Ashley with all her wedding bouquets from her bridesmaids.  I really love this photo.  The bottom photo is their wedding party.  They had seven attendants not including their ushers and 3 little girls and one little boy. 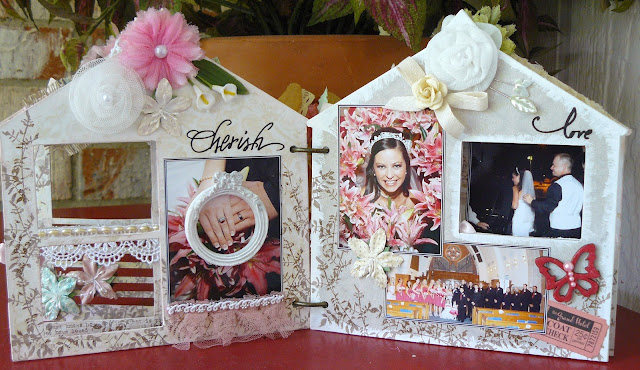 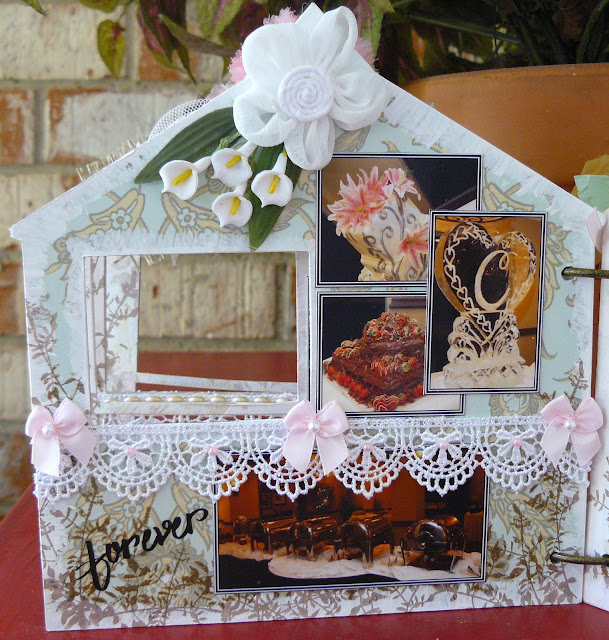 These photos are the wedding cake, grooms cake, and ice sculpture, and the food for all the guests at Shady Valley Country Club.  The cakes and food was very delicious!! 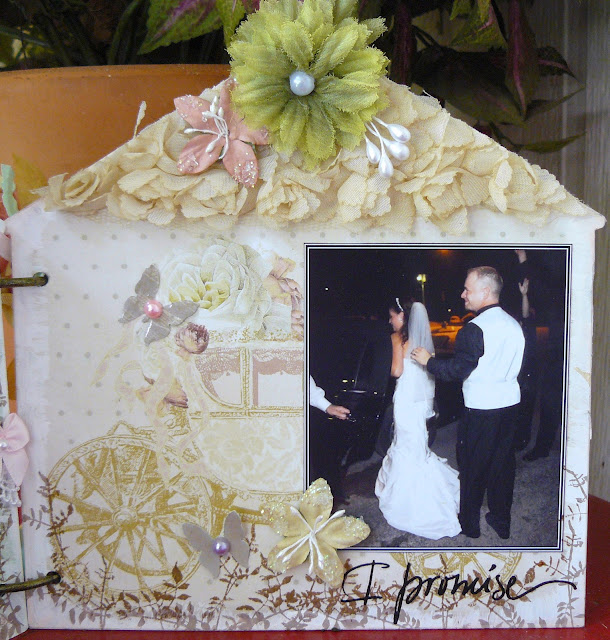 This is Ashley and Chris getting into their Lincoln limo.  It was a very long night but what a celebration.  They are off to Ft. Worth for their honeymoon that evening!  Then on to the beach!! 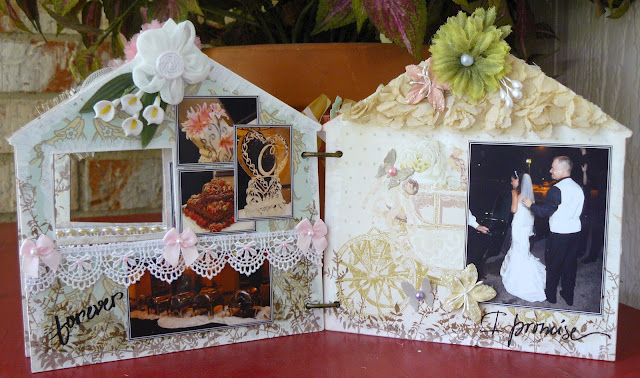 This is both pages again and the end of the mini album.  It was a sweet album to work with.  It was very hard to choose photos for you see there was almost 10,000 photos taken that evening!!


Thank you for taking a look at this cute album.  Please see below the list of items that were used.


Again, thank you for stopping by and please visit The Crafty Scrapper.

A Rose Can Say I Love You 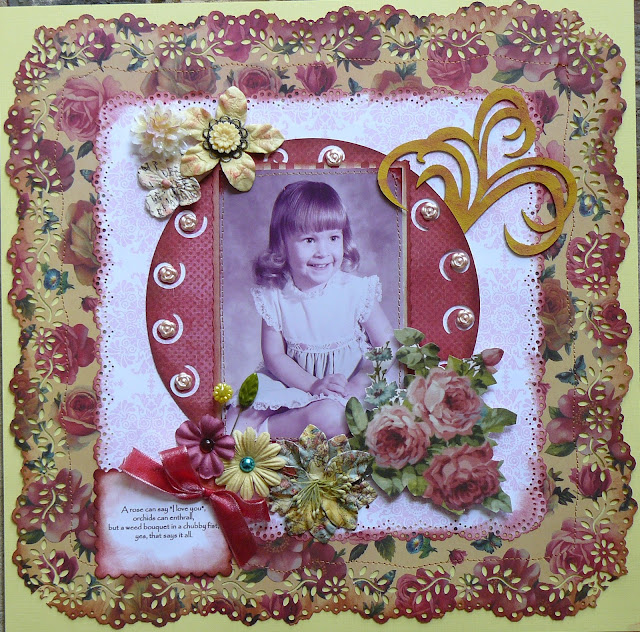 This is my oldest child Heather.  She was three when this photo was taken.  That was in 1976!!  Yes, she is now 39!  How did that happen!!  I really love this floral paper!  I wanted something that was so sweet to look at just like the little photo.


I did use part of a little poem which reads:  A rose can say "I love you", orchids can enthral, but a weed bouquet in a chubby fist, yes, that says it all.


I punched, inked, circle cut, painted, etc. on this layout.


Here is the list of items that I used:


Thank you for taking a peek! 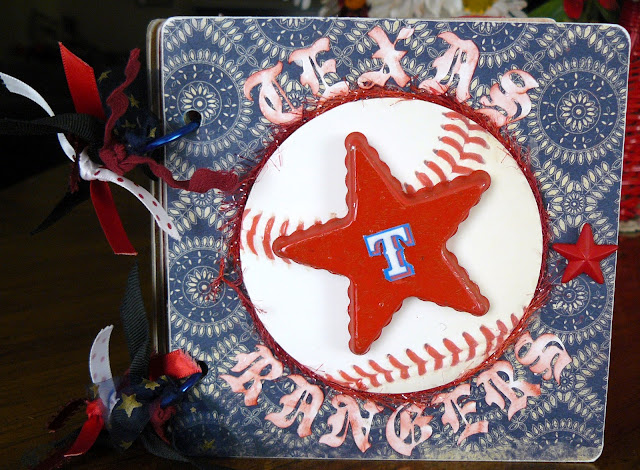 This is a mini album I did for the Design Team at The Crafty Scrapper.  I really loved the papers that was given to me except it is from Authentique Glory Collection.  I looked through photos until 2007 and realized I had no 4th of July photos!  Even though I have 4 grown children and 4 grandchildren none were to be found.  So, my mind started thinking about what was I going to do.  At last it dawned on me we just went to our hometown baseball team...The Texas Rangers!  Yes, their colors are blue and red.  At last I had a mini album.  I used the paper and then with my Cricut I cut out Texas Rangers then inked all around each letter.  I was given a large silver star and painted it and then added Glossy Accents so it could not be chipped off.  I used Microsoft Clipart for the baseball which I enlarged and glued it to a piece of cardstock.  I then took Glossy Accents to each stitch.  I also used the T and placed on the star.  Please look inside to see what we did at the game!!! 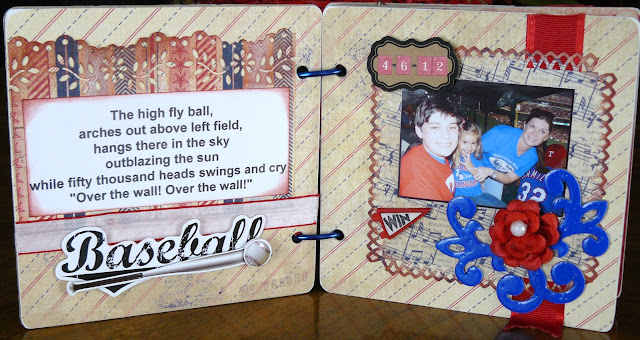 I found this poem about a fly ball which I felt I needed to start off this mini album.  On the right page it my daughter Mandy and her son Logan and her niece Kenzie.  We were getting ready for the game to begin! 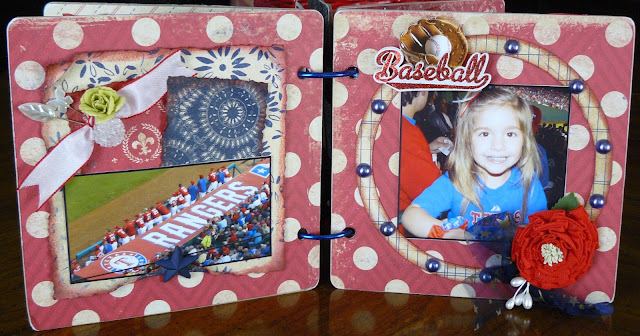 On the left side all the Rangers are lined up just waiting to begin.  On the right is Kenzie just grinning!! 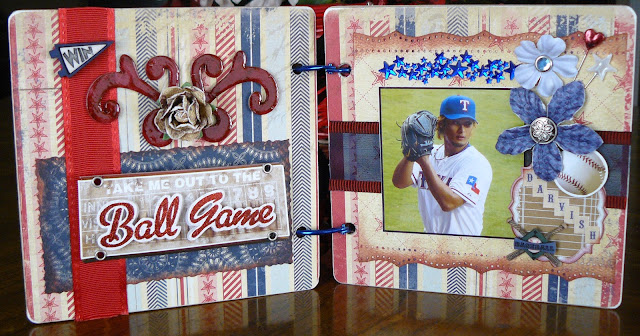 This  photo is Darvish The Texas Rangers pitcher they just got this year.  This was his first game to pitch so there was a full house of  fans!  He started off a little slow but he soon got over his jitters and started pitching great!!! 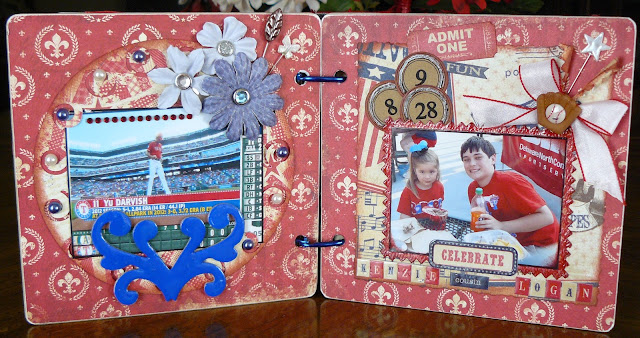 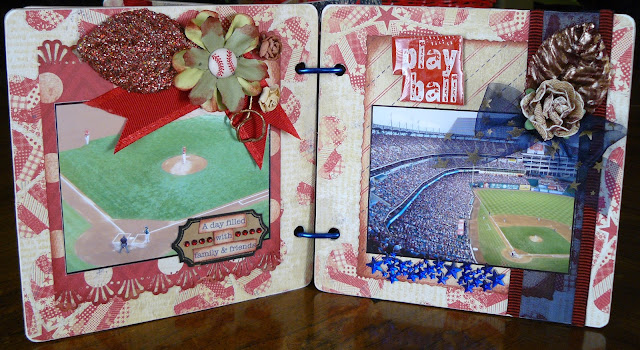 The photo on the left are the players out on the field while the photo on the right is a view of all the fans!  It was a beautiful day to be at the Ballpark.  It was in the 70's so the weather was great!!  Thank you so much for looking at the album.  I had a lot of fun putting it all together.


This mini album was sent to the Arlington Convention Center for Great American Scrapbook Convention.  I had on the back of the album a list of items that I used...but it was gone once I got the album back.  So, I will list again all the items that I used to the best of my memory!


Thank you again for looking and please visit The Crafty Scrapper!! 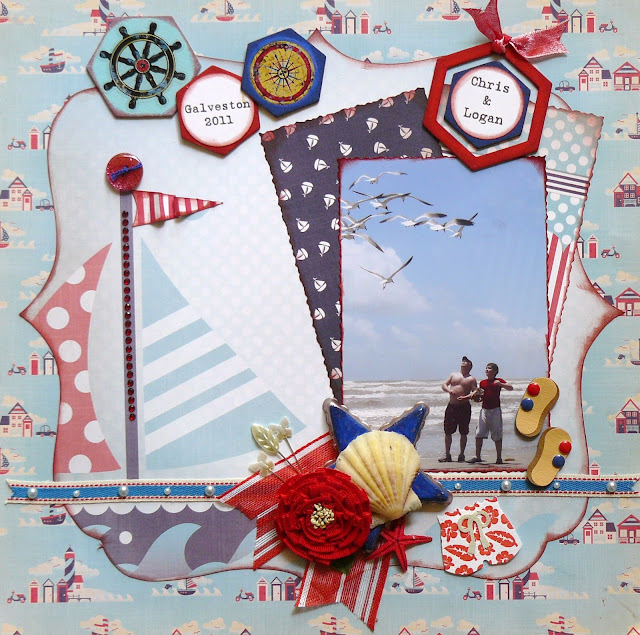 I really love this photo of my son Chris and my gs Logan.  I actually did this layout for the Design Team at The Crafty Scrapper.  The papers reminds me of our annual trip to the coast...Galveston, Texas.  We always have a great time while we are there.  This photo shows them feeding the birds which I just love doing and the waves in the background our so large!  I tore, inked, and added lots of embellishments.


Here are the items which I used:


Thank you again for looking and please visit The Crafty Scrapper!

Hugs - Ginger
Posted by Gingersnaps and Butterflies at 1:08 PM 1 comment: 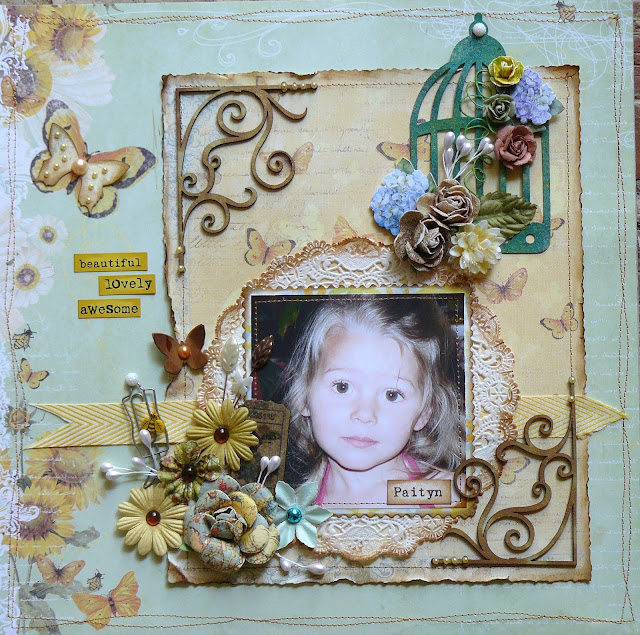 I did this layout for the Design Team at The Crafty Scrapper.  They needed this one for the GASC that was being held in town.  I love this pretty paper by Prima which fits well with this little sweet photo of my gd Paityn.  she has the most beautiful brown eyes.  I inked, die cut, stained, and used my sewing machine to achieve this look.


Thank you for looking and please visit The Crafty Scrapper!!


Hugs - Ginger
Posted by Gingersnaps and Butterflies at 12:55 PM No comments:

A Garden In Every Childhood 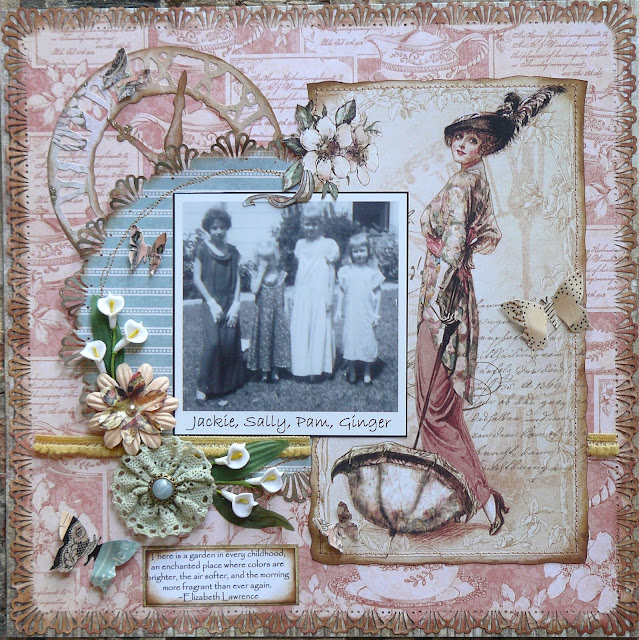 I really love this paper by Graphic 45.  It is A Ladies Diary.  It reminds me of earlier times of my life.  This photo was taken in 1958 in Van, Texas.  Jackie and Pam are my cousins and Sally is my younger sister.  We were in our backyard playing dress-ups.  This photo really brought back fond memories.  I stitched, punched, inked, and used a die cut.


There is a poem that I used at the bottom of the page which reads:


"There is a garden in every childhood, an enchanted place where colors are brighter, the air softer, and the morning more fragrant than ever again."
By:  Elizabeth Lawrence


I really love this part of the poem.


Here are the supplies that I used:


Thank you so much for looking!

Hugs - Ginger
Posted by Gingersnaps and Butterflies at 2:32 PM 1 comment: 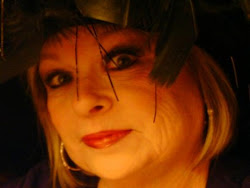